I always have mixed feelings about vacations. I have a blast during the day but at night, I always wish I was home in my bed with Jeff and the cats. This vacation was no exception.

We drove up to Framingham on Friday morning. We stopped by the hotel to see where the closest commuter rail stop was. Although check-in was not until 4:00, they let us check in at 11:00. Nice bonus! Our room cost us $118.63 for the two night stay. N 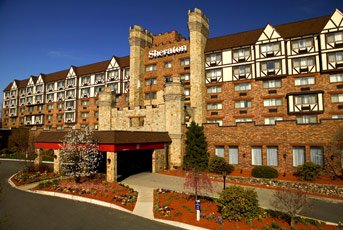 ot bad when you consider this is where we stayed:

My husband thought it was awesome that the place looked like a castle. The room was very nice, although the bed was extremely firm. I really missed my Select Comfort bed (but then again, I always miss my SC bed when traveling). The staff was really nice and extremely helpful. They provided us with subway maps and a map of Boston to help us get around.

Once we got into the city, we purchased $12 worth of subway fairs (3 rides each). We got on the subway and went down to Quincy Market. We ate lunch there ($17 for burgers, fries and soda) while pondering what to do for the rest of the day. By this time, it was about 2:00 in the afternoon and Jeff had never done the tourist thing in Boston before so we decided to purchase trolley tickets. The trolley takes you all around the city, with nine stops where you can get off. Our trolley ride also included a harbor cruise so for $34 each, it was a pretty good deal. I just wish we had gotten into the city earlier. Since the trolley pickups concluded at 4:30, we only got off at one stop. The entire tour of the city took about 2 hours, including getting off at the USS Constitution for a quick (free tour). Had we gotten to the city earlier, we could have gotten off at more stops and explored the city a bit more. The tour guide we had on the trolley was awesome though. He got to see where Ben Franklin was born, where Paul Revere started his run to let us know “the Regulars are coming” (not the British, since they were all British back then), and where many of the founding fathers are buried. At 4:30, we got onto the boat for the harbor cruise. It was about an hour long. The narration was taped, which was a bit crappy, but it was still very informative. Boston Harbor is really pretty so it was fun to go do that. When we got off the boat, we walked over to a free event Volvo was having (which we heard about from the trolley guide. He indicated there was supposed to be free food, but the line we decided it wasn’t worth it.

We walked back to where the harbor cruise was and decided to walk to the North End to get some Italian food for dinner. It always amazes me how good Jeff is at finding good wine and good places to eat. We walked by this small restaurant, Jeff looked inside and decided this is where we should eat. The food was amazing. I’m annoyed with myself because I didn’t even look at the name of the place when we walked in and since we paid cash I have no receipt either. We had a wonderful dinner, Veal Parm and Chicken Marsala, salad, bread, Jeff had a beer and I had a coke. The total with a 25% tip was $51. The service was great. My water glass was never empty (which was good because I drank a lot of water that night) and they brought us more bread with our meal which was great for dipping in the sauce. The food was SO GOOD.

When dinner was finished we walked back to the subway and connected back up with the commuter rail. It’s funny because I did not look at the schedule at all, but we arrived back at the station about 20 minutes before the train was scheduled to arrive. Had we missed that one, we would not have been able to catch another one for 2 hours. You’d almost have thought we planned it (we are just REALLY lucky sometimes). We got back to the car and stopped at a convenience store to get some drinks (much less expensive than getting something at the hotel). We got 4 bottles total for $5.

Since we had already blown most of our budget for the weekend, we decided to explore New Hampshire a bit on Saturday. We got McDonald’s for breakfast ($11) and headed off for adventure. We drove all over and had a really good time. We like to explore, what can I say? We are a bit odd. We stopped for coffee in Concord ($5) and walked around a bit. The downtown is pretty cool with lots of little shops. I found a local yarn shop and spent $20 of my blow money. We ended up driving down the coast of New Hampshire, looking at all the pretty houses and enjoying the smell of the ocean air. After all that driving, we were pretty tired so we picked up some Wendy’s on the way back to the room ($16).

Sunday morning, missing the kitties like crazy, we went home. It was so good to be home. The cats showered us with love when we came through the door. I think they missed us.

We had such a great time and didn’t really spend a lot of money. We did spend money in the city but we had a quiet roaming day on Saturday to make up for it and I’ll have a new pair of socks to help remember the occasion. They’ll be my 8th anniversary socks.

Happy Anniversary, Jeff. Eight years and still going strong.  I can’t wait to see what the rest of our life looks like. I love you.