Yesterday was our 13th anniversary. We knew our anniversary was coming. It is every May 18th (although my husband also likes to take note of May 17th since that is the day we flew out to Vegas for our wedding but that is a whole different story). Special events don’t just sneak up on us. You have advance warning. Make sure you budget for them. 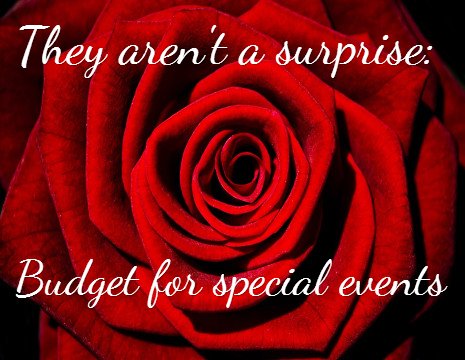 If you are attending a special event or have a birthday or anniversary coming up, don’t forget to put that in your budget. When I created our budget for this month, I looked to see what was coming up. This budget encompasses two special events: our anniversary and my husband’s birthday. In the past, we would take a trip for our anniversary but since we are getting out of debt, we decided we would just budget for a nice dinner. For my husband’s birthday, I typically make him a very nice dinner. He’s not big on birthdays so this won’t cost a lot.

Since we didn’t want to go crazy and really get our budget out of whack, we decided to increase our entertainment budget slightly. We would have a nice dinner for our anniversary and cut out entertainment for the rest of the month.

We still found a deal

You know me. I have a hard time eating out without some kind of deal. Well, I even found a deal for our special dinner. I was scouring the internet for Groupons and Restaurant.com deals, but nothings really fit. Our anniversary fell on a Sunday so I started looking at some of the nicer restaurants in the area to see if there were any specials. I found one! When we originally discussed getting married locally, we were looking at the Mill on the River. It is a beautifully romantic restaurant and they just happen to have a dinner deal on Sunday and Monday nights. Jackpot!

We had a wonderful dinner. They even brought us champagne with our dessert and wrote “Happy Anniversary” on the dessert plates. I should have taken a picture but we were so caught up in the moment that we completely forgot. A deal and wonderful service. I couldn’t have been more thrilled.

It’s okay to spend when it’s in the budget

We spent a fair amount on dinner (we also had a bottle of wine), but we didn’t worry about it because we budgeted for it. We actually spent almost the exact amount I budgeted. I didn’t fret over it because the money was allocated for that dinner. I wasn’t using gas money or grocery money. I was using anniversary money.

It’s okay to go out a few times a year for special occasions as long as you put it in your budget. Our anniversary is really the only expensive dinner we have each year. Our birthdays are pretty low key, spending wise (although Kristinmas is a major holiday celebrated every December 27).

If you can pay your bills and you budget for the event, don’t feel bad about spending a little money for a special event. Just make sure every day isn’t a special event!

How do you handle special events in your life? What are your favorite things to do for an anniversary or birthday when you are living on a budget?