I think it’s important to not only let you know about my frugal successes but also my miserable failures. This weekend was not as frugal as I had hoped. My husband and I went to Washington, DC this weekend. We had been planning to go for a while but we’ve been so busy for the last two months that we were putting together our final plans on Thursday!

I didn’t want to pay to stay in DC so we looked at our options. We looked at the rail line and noticed that there was a commuter line from Baltimore to DC. Being from Massachusetts, I’m familiar with the commuter line in Boston and we’ve taken it a number of times to get into the city. It was going to cost us $6 each way to get into the city and the times worked with our schedule. Excellent, right?

So I travel over to Priceline.com to start bidding for my room. I tried DC first, just to see if I could get a room for $45 a night. Did not happen. Tried all the suburbs of DC as well, with no luck. So then I tried Baltimore. I got a 3 star room right across from Camden station (the station that we wanted to use to go to DC) for $45 a night. AWESOME!
Thursday, I sent my husband over the store to get some lunch meat and snacks so we could bring them with us on Friday when we left. We had an event Friday morning so we had to get up early. We’d be at the event all morning and then leave for DC. We packed up all of our stuff Thursday night and were ready to go. Friday morning we woke up, showered, made coffee and ran out the door… without our lunch supplies. Grrrr. We ended up getting fast food for lunch. At least I had coupons.

We decided to avoid toll roads on the way down there. While it saved us about $25 in tolls, it added over 2 hours to the trip. I didn’t really think it was worth it and we took the toll road home. While I hate tolls, I think I hate driving long distances even more.

We finally rolled into Baltimore, after eating dinner at Bob Evans. At least all the meals we ate were really inexpensive. There was a $21 a night parking fee at the hotel. I figured there would be a parking fee in the city and it was actually less than I had thought. I’ve seen parking fees up to $40 a night, so I figured that into my budget. Once we got into the room, I went to the Maryland Transit Authority website to check the schedule for the next morning. The chart I had seen the day before was replaced with a message that stated that the commuter line did not run on the weekends. Really? Are you kidding me? I started to freak out a bit. I was worried how we were going to get down there and how were we going to park the car.

Jeff jumped into action. It’s awesome being married to a former Army Cavalry Scout. He got on the laptop and started looking at all the DC Metro lines. He looked at the availability of parking and wrote down a number of stations we could go to. Luckily, parking is free on the weekends so it only cost us $1.85 each way per person. That little mix up actually saved us $16. That paid for the lunch we had to buy because we forgot our lunch supplies.

We had a great time in DC. I’ve got blisters on my feet from all the walking. We ate frugally while we were there. Not as frugally as if we were home but I think we did well. The room was very nice for $66 a night (including the parking). Baltimore was a cool city but we were so tired we didn’t see much of it.

How we could have done better:

Had we researched the DC Metro better, we could have stayed in a smaller city or town, where we would not have had to pay for parking. Potential savings: $42

We could have remembered our food. Potential savings: $25.

We could have taken the non-toll roads home. I think I would have gone nuts though and I don’t think it was worth my sanity. Potential savings: $24.

So we added about $100 to the cost of our trip, but we also saved some money on the trip:

We didn’t take the toll roads on the way down there. Savings: $24.

We were very frugal about the restaurants we picked, not that I could have gotten away with not feeding my husband Bob Evans. We ate there three times in three days. We also used coupons from our Entertainment book where ever we could.

Taking the DC metro instead of the MTA saved us a little over $16.

So the key to traveling is to do as much research as possible. Make sure you know how you are going to get around once you get there. If you have the chance to take public transportation into a major city, you can save yourself a ton of money on hotels and parking.

Was all the trouble worth it? I think so. Now to get some more sleep. I’m exhausted. 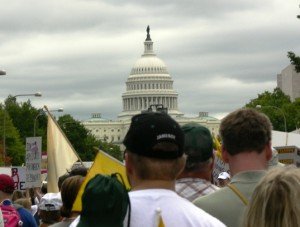