It’s a new month which means it’s time for a new budget. Before the month begins, you should make a budget where you spend all of you income on paper. Give every dollar a purpose before your money decides its own purpose.

Jeff and I just did our budget for October. It’s going to be a lean month. I’m trying to save up money for renewal fees for the firm which are due in December. So here are the cut backs:

Did you do a budget this month? Are there any great wins? Any disappointments?

The bane of our budget the last few months has been eating out. It breaks my budget every month. Luckily, there is usually slack in my grocery budget and it all evens out, but I’d love to be able to take some of that cash and add it to my debt snowball. In order to get that budget under control, I started to look at why we were eating out.

Most of the time we were eating out because we were running errands and didn’t eat before we left the house. We’d stop for fast food or something inexpensive somewhere while running errands. Am I the only one who thinks that fast food is getting ridiculously expensive? Seven bucks for a value meal? Really? But I digress… so we were spending a lot of money because we were not prepared. Since I’ve identified this problem, we’ve either eaten before we go out or I’ll plan something quick to make when we get home.

Other times I just don’t feel like cooking something. That doesn’t happen often but it does happen. I’ve now got stuff on hand to make a ton of quick meals that either my husband or I can make. Having a meal plan helps but having back up plans, like grilled cheese or an awesome salad is a budget lifesaver. Hell, even keeping a couple boxes of mac and cheese is a cheap way to fill your tummy without breaking the bank (note to self: we are out of mac and cheese).

A few times, not very often anymore, there were foods that I just loved that I didn’t make at home.  Pizza was one of those things, until I found Kristen’s recipe. I found this about two or three months ago and I think we’ve only had takeout pizza once since then. I make it every week to cut out my husband’s pizza cravings. I’ve also remembered to mix in recipes Jeff really loves, like my chicken marsala (recipe can be found on the recipe page of this site). I made it this weekend and it was a huge hit. Figuring out how to make our favorite foods has really helped us save a lot of cash. Have you tried to go out for chicken parm or chicken marsala recently? Wow, that’ll cost you. The chicken marsala I made this weekend cost us… are you ready for this? Less than $3. Not per serving but $3 total (Chicken $2.00, can of mushrooms $.25, clove of garlic $.10, half a box of pasta $.33, Marsala wine $.30, flour and seasonings were all on hand = 2.98). That’s a $40 dinner if we went out.

So if you think you are eating out too much, think about why you do it. Plan a strategy for eating out less and watch those savings pile up.

For week one of Financial Peace University, we had to do a quicky budget. This was a breeze for us since we had just done an updated budget a few weeks before starting FPU. I did slash my grocery budge 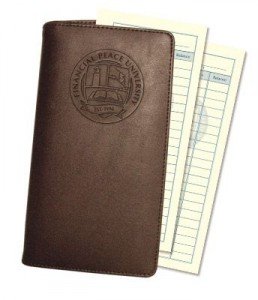 t though. I’m trying to spend $250 a month on food. That’s groceries, eating out, everything. I get $250 every four weeks, although I’m trying to stretch that out to the first of each month, but since I started the budget, I took the first month of grocery money (technically May’s money) April 23th.

I’m also paying for all the food with cash, using Dave Ramsey’s envelope system which came in the FPU package. It’s a pretty nifty little file.  It’s got envelopes in it that are held together in a spiral file along with a little zipper pocket for your change and a few loose envelopes. You put each category in an envelope and when you need to spend on that category, you take the money out of the appropriate envelope. There are also lots of lines on each envelope to record inflows and outflows of cash so you know how much you’ve got left. At first I was pretty apprehensive about using cash for anything. It’s slower than using the debt card and I really didn’t think it would change my spending habits much. I have to say that so far, I’m a fan.

This has not been the most frugal week for groceries. My original plan was not to spend anything on groceries until May 1. Well, that went out the window when we had the water problems. We went to Wal-Mart to get drinks, water, cat food (gotta feed them or they get pissy), aluminum foil and parchment paper (we’ve been out for a while). We also got some snacks for lunches and a few things that were marked down. They had hamburger helper double packs for $2, which around here is an awesome deal plus we were out of HH. I had a few coupons and the water and soda were generic. I also got a copy of AllYou Magazine after reading about it on another blog. It had $78 worth of coupons in it for $2. I thought I should check it out. It should more than pay for itself.

We then went to a local produce store that everyone I know has been raving about. We did well there. I bought a head of iceberg, a bag of romaine hearts (2 or 3 in the bag), mushrooms, a pepper, an English cucumber and a bunch of bananas for $10 bucks.

Before hitting Wal-Mart, we were both pretty hungry so we shopped at Wendy’s. Am I the only one that has a heart attack when you get your total at fast food places now? I remember when you could get the Big Mac meal at McDonald’s for 2.99. Now it’s almost $7. Wendy’s cost us $14 but going to Wal-Mart on an empty stomach is a really bad idea. I see the $14 as a coupon really, since we might have spent more than that in additional crap at Wal-Mart. Never go shopping when you are hungry.

I’ve also made two other small trips to the grocery store. I really wanted hamburgers this week and we had dinner at a friend’s house last night and we picked up a few things at the grocery store. I also bought a coffee at a local coffee shop so I could use their WiFi to get some work done between appointments. That cost me $2, but I did bring my travel mug which saved me about 50 cents. Plus, the WiFi was free and I didn’t need to drive all the way home to get work done. Still a food purchase but it saved me time and gas.

I started with $250 in my envelope. I have a balance of $168. I spent $82 on food this week. That is a lot of money for the fact that I was planning to spend nothing this week. Was it worth it? I think so. I spent $7 at the grocery store to get stuff to make hamburgers. Had we gone to Wendy’s it would have cost another $14. I could have eaten something else but it was hot and I really didn’t want to heat up the house. We were on the verge of it being an “order-pizza-quick!” night. That would have cost $20 bucks. Yes, I spent money on food to bring to a friend’s house which was not in the plan, but we don’t get to see them as often as we’d like and it was a lot cheaper than going out. I spent about $10 on groceries and checked for sales on chicken before I left the house. I paid $1.99 a lb for boneless skinless chicken. Much better than the $4.69 or more you normally pay at the stores around here.

The week was not as good as I had hoped. I think spending cash has really helped though. I know that balance off the top of my head and it makes me think twice about adding something to the cart.Plus counting out the cash really makes you think about how much you spending. How many times have you gone to the store and not even looked at the total before swiping the card?

I’ve still got $56 a week if I use the four week plan and only $42 a week if I try to stretch it out until the end of May. I think I can probably make it to the end of May. We’ll see how it goes. If I’m going to do this, I need your best tips to stretch my dollars. We are going into warmer weather so I need good summer tricks. I find we tend to spend more on groceries in the summer since we buy more fruits and veggies and more meat to grill. How do you save on groceries?

I also wanted to mention that Dave Ramsey is having an awesome sale over at his website. If you are interested in his books or any of the other Financial Peace tools, now might be a good time. It’s also a good time to pick up extra books as wedding or graduations gifts.