Today’s post is written by Nick Pavlidis. Nick was recently featured on The Good Men Project, asking the one question to tell if you’re a terrible husband.

Nick and I are doing a blog swap today. You can find my post at his site, Step Away from the Mall. 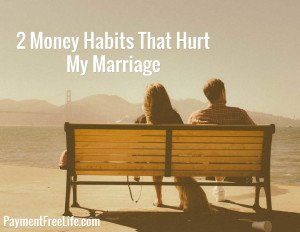 On a beautiful Sunday afternoon in May 2008 my wife and I had a Big Fat Greek Wedding surrounded by 250 of our closest friends and relatives and 4 wedding crashers.

The Sunday thing was my idea to save a few bucks on vendors who would still have Saturday to sell. While I thought that was pretty brilliant at the time, it resulted in several people not making it to our celebration. In hindsight, the wedding was amazing and everyone there had a great time (open bar helped…) but several people had Memorial Day commitments and were missed. (It’s also possible that I’m just unlikable…).

We have made several big and little decisions with money in the years since that day. And since I’m more of the “money guy” in the relationship, I tend to get a little excited about making these decisions. Yet even with a healthy opinion on money and tireless commitment to planning well with money for our future, I still battle two big money habits that have bitten my marriage in the backside more times t
han I’d like to admit.

The bad news is that I allowed these habits to continue. My bum is sore and my marriage has a few scars as well.

But the good news is that overcoming these habits provides incredible opportunities to strengthen our money and marriage over time.

Ok, enough about my tushie. Here are the habits:

1. Not asking for my wife’s opinion

This has come up more than I care to admit. My instinct is to take things off her plate and protect her from some of the stress that’s inherent in making tough money decisions.

That leads me to make decisions without consulting her.

And not only does that make her feel undervalued or unloved, I have no doubt that most of our money mistakes have come from solo decisions.

Her input is fresh and from the perspective of someone who isn’t as much of a “numbers person” as me.

And most of the time that reveals the real-world consequences that some of my “ideas” would have.

But we will also be pretty skinny because it would not leave much for “food,” after paying our home, car, and other expenses. 🙂

And while I could probably stand to shed a few lbs these days, agreeing to the intensity level with which we work, spend, save, and give, is powerful for our relationship.

She feels more loved and valued. I have an extra opportunity to connect with her. And we often get better results on a plan we both agree to.

2. Not trying on my wife’s shoes

I’ve been known to accidentally wear my wife’s socks to work. That’s what happens when you blindly grab a pair of black socks from the clothes basket in the morning on the way out the door.

But when making money decisions I often make them based upon “my logic,” or I agree, but say something stupid about a potential purchase without first taking her size sevens for a spin around the block.

“$25 for a mani-pedi? Isn’t that just paint on nails? Don’t they sell whole jugs of paint with a free brush at the grocery store for $1? I don’t get it, but I’m not going to stop you.”

It turns out I don’t have to get it. But now I do. Because I asked.

My ignorant assessment of the “value” of a mani-pedi fails to take into account the “me time,” “experience,” and “hand or foot massage” that comes with the mani-pedi.

And those are totally “worth” way more than the $25 Wednesday special mani-pedi hits our wallet.

The heartache these could have saved.

I battle these habits every day. I’m a “doer,” which means I like to get just enough information to make an informed decision and move on.

But marriage and money are about way more than just the “decision.”

The process counts just as much or even more than the result.

And that’s why in school giving the right answer to a math problem only gets you partial credit.

You only get full credit when you “show your work” and get to the answer the right way.

Just like marriage. Getting to decisions the right way will only enhance your relationship, and results.

What’s one money habit that you struggle with that interfere with you connecting with your spouse? And better yet, what can you do today that helps you connect better with your wife about love and money?

Nick Pavlidis is a husband, father, lawyer, and business and life coach whose upcoming book, Confessions of a Terrible Husband: Lessons Learned from a Lumpy Couch, exposes how he became a terrible husband, discovered that he was a terrible husband, took inventory, and committed to becoming better and better each day. He is a proud marriage “nonexpert” who is working tirelessly to improve his marriage in the open so he can insprire, encourage, and equip others to improve theirs. You can get the latest news and Nick’s real-time updates on becoming a better husband at the Confessions of a Terrible Husband blog.