I love the smell and taste of good homemade bread but who has time? My schedule is not exactly conducive with making bread at home on a regular basis. Well, that’s until I discovered Artisan Bread in Five Minutes a Day

. The book was released near the end of 2007 and I’m kicking myself for not buying it sooner.

My first encounter with bread from this book came from my friend, Jenny, who brought a few loaves to a party at my house a few weeks ago. The bread was fantastic. When she said how easy it was to make, I ordered a copy for myself and for a friend as a birthday present. The book arrived last Wednesday and I eagerly started reading.

The concept seemed pretty simple. You mix up a very wet dough, in a large batch and keep it in the fridge. When you want bread, you just pull out some of the dough, shape it, rest it and bake. No kneading required. When I read those words, I immediately fell in love. I HATE kneading. I’m not really sure why I dislike the practice so much, but I do. I thought there is no way that it’s really going to be this easy. I decided to make my first batch on Thursday before I ran to class so I could bake some up for dinner that night.

Mixing was extremely easy. I got out a big plastic salad bowl that I never really used for salad. It has a good lid on it and would allow the gases to escape while the dough rose in the fridge. See, I knew that outlet purchase would come in handy someday! The dough was really wet but the book said it was supposed to be. Into the fridge, my concoction went.

When I got home, I cut off a small bit of dough and shaped it into a round loaf. The book recommends having a pizza peel and a pizza stone, but since I didn’t have any of those things, I used an inverted baking sheet and some parchment paper to bake the bread on. After resting, I baked the loaf and hoped for the best. I barely got the bread out of the oven, when Jeff started hovering around. I swear, men can sense fresh bread from miles away. I cut off a bit so we could both try it. The bread was wonderful. The crust was firm and crunchy but the inside was moist and delicious. I wanted to take a picture of that first loaf, but it was gone before I thought to get the camera.

Saturday, we had a late lunch so I hadn’t really planned anything for dinner. At around 9PM I started craving pizza. My regular pizza recipe requires about 2 hours to make and I didn’t want to order take out. Then I remembered the pizza recipe from the book

. I pulled out some dough, followed the directions and in 20 minutes, I had this: 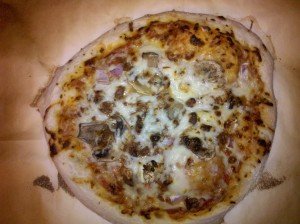 The pizza was great, although I think I might need a pizza stone when making pizza since the crust wasn’t as crispy as I like. My pizza has sauce, cheese, mushrooms, onions and real bacon bits on it. The flavor was fantastic. I will definitely be making this again. It was cheap and was ready in less time that delivery!

Tuesdays and Thursdays are a bit crazy around here since I teach in the afternoon and with traffic, I usually don’t get home until about 5:30. Last night was a bit more crazy since my nephew’s wife had a baby that morning. When I got home, Jeff was on the phone with his sister, Anita (the new Nana). After catching up with her (she lives halfway across the country), we both realized we should probably attempt to get something on the table for our starving men (and maybe for her kids too…maybe).

Chicken Parm seemed like a good solution at our house and I decided to make up some bread to go with it. The great thing about the book is there are about 50 recipes in the book, using various doughs you can make. The first loaf I made required 40 minutes to rise. I really didn’t want to wait that long, so I decided to make a baguette this time (only 20 minutes to rise).  I’m not very good at shaping yet, so the loaf looked a bit more like ciabatta, but it was good none the less. The dough had definitely developed more flavor since the first loaf I made. The longer it stays in the fridge, the more sourdough notes it develops. I had fully intended to take a picture as soon as it came out of the oven, but hovering husband distracted me. I did take a picture of what was left after dinner. 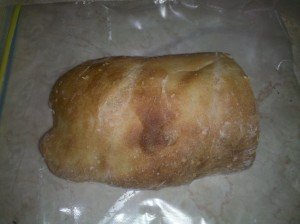 Like I said, I’m still working on the shaping. The bread was fantastic and was ready in 40 minutes. I would say I spent a total of five active minutes on the bread, including mixing up a new batch of dough for the fridge. I didn’t even have to wash out the bowl. The book and my friend Jenny, recommended just scraping down the bowl and adding the leftover dough to the new batch. The starter helps the flavors develop faster. Since we didn’t make it to the sourdough stage on the first batch, I’m hoping we get closer on the second batch. I’m not sure this new batch will last that long either.

is making me look great in the kitchen. Oh, and the best part? The basic dough recipe requires only four ingredients: water, yeast, salt and flour. So not only is the bread awesome, it’s really inexpensive to make. When you think about how much you could spend on baguettes, Italian loaves, ciabatta and pizza, this book is going to save you a ton of money in the long run. It’s already paid for itself in the first week at my house, especially with the pizza savings. I would encourage you to check this one out.

People ask me all the time how I manage to eat at home almost every night, especially with tax season and teaching. People tell me they don’t have time to make extravagant dinners during the week. You know what? I don’t either. I think there are a lot of people out there who believe that food must be time consuming and require a knife in order to be considered dinner.

I very much disagree. Dinner must be a comforting way to end the way, as far as I am concerned.  Sometimes that comfort comes from getting something on the table fast so that you can enjoy time with your family. A lot of times during the winter, my husband and I will have soup and sandwiches for dinner. It’s hearty, quick and with lots of variety (well at least for me).

I’ll make tortellini soup (see Recipe page), or if I don’t have tortellini, I’ll add small pasta instead. Usually sandwiches for dinner are grilled. Grilled cheese, sometimes with a bit of ham, is a huge favorite in my house.

I worked at a large chain restaurant when I was in high school so I am a big fan of “the melt”. A melt is very easy to make and is great for using up leftovers.  Take two pieces of bread and butter them like you are going to make grilled cheese. Place both pieces of bread, butter side down on a hot grill pan. Put a slice of cheese on top of each piece. Now to consider the filling. You can put pretty much anything you between these two pieces of bread. By toasting it, you’ll have a good foundation for your sandwich:

Add sliced meatballs or sausage and use mozzarella cheese

Add ham, turkey, corned beef or pastrami and some 1000 island dressing for a Ruben. You can add sour kraut too.

The possibilities are endless. Just heat up your filling separately then add it to the bread once it is toasted.  This is a great way to use up leftovers and still get a hearty dinner on the table FAST! If you need to add some veggies, serve with carrot and celery sticks or a small salad.