To say that last week was a difficult week would be an understatement. We ended up eating out a few times and spending all of our entertainment budget for the month (and we still have a little over two weeks to go). Saturday night, we really wanted to order pizza. We were so tired and neither of us wanted to make dinner. Jeff even offered to use his blow money to order pizza. It was tempting. Really tempting but we didn’t do it.

We both knew the entertainment budget was gone. We did have blow money but I didn’t want to spend it. We had bought a bunch of groceries in the past few days so we had food.

It was getting late and we needed to eat something. We had no cereal in the house, no lunch meat either. I was starting to cave and was about to tell Jeff to order pizza when a light went off in my head. 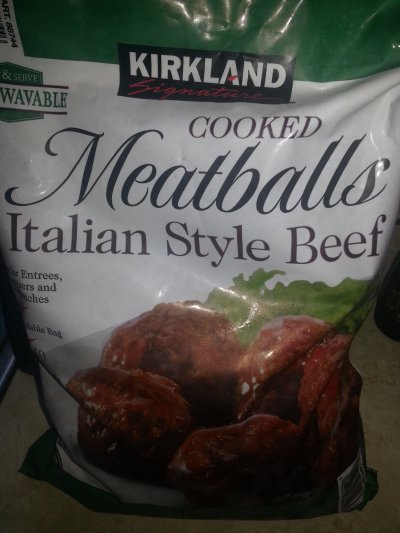 I had a  huge bag of frozen meatballs from Costco. I put some in a bowl and thew them in the microwave for a few minutes to defrost them. While they were in the microwave, I poured a jar of sauce in a pan. I sat down as the meatballs mingled with the sauce. Twenty minutes later, we had hot meatballs and sauce, hot dog buns and mozzarella cheese.

Since we did not order pizza, I made some pizza dough on Sunday. We will have pizza this week.

What do you make when you just don’t want to cook? How do you keep yourself from ordering take-out?