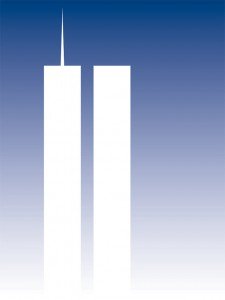 On September 11, 2001, I was at Westfield State College in Westfield, Massachusetts. I had just accepted a job offer the day before as I was graduating in December.  I arrived early that morning to tutor a student and as I walked into the tutoring center at 8:50, people were talking about a plane that hit the World Trade Center. It seemed very odd to me, but everyone thought it was an accident. Maybe a small plane. I had ten minutes until my appointment so I went down stairs to the commuter lounge to see what was going on. The televisions were set to the news and a crowd of students were starting to assemble. At 9:03, we were watching live coverage when the second plane hit. People screamed; some started to cry. I ran back upstairs to cancel my tutoring appointment. I remember the student yelling at me. I told her I was in no condition to tutor anyone that day.

I went back downstairs to call my husband and my mother. It was one of those events that makes you want to call your loved ones to tell them you love them.

I remember standing with a friend of mine watching as the first tower collapsed. A few minutes later, a couple students walked by celebrating that classes had been cancelled. My friend turned to them and yelled, “Do you have any idea what is going on?”. They just shrugged and walked away. When they cancelled classes, we didn’t know what to do. Westfield is a commuter school. We knew the Pentagon had also been hit and we had learned that another plane had just gone down in Pennsylvania. We didn’t know if it was safe to drive home because we didn’t know if there were more planes in the sky. We didn’t know if this was just phase one.

I decided to drive down to my In-Law’s house since I didn’t want to go back to our apartment. My sisters-in-law would be there as well as my mother-in-law and my husband was planning to go there if he could get out of work. On my way to Windsor, I saw planes coming down one after another. I had never seen anything like that before. It turned out that a lot of the flights from New York and Boston were being diverted to Bradley. I didn’t know that until after I called my husband again. I was scared on the highway but he reassured me.

We were all numb. Everyone I spoke with and saw that day. We watched planes crash and buildings fall. We watched people jump from the buildings and people running through the streets. We also saw heroes run into those buildings to help others. We saw people who helped others get out of the buildings. We saw passengers takeover a plane and save countless lives with a call “Let’s Roll”. We saw a Country come together at memorials and funerals. We saw neighbors reconnect and communities become stronger. Out of the rubble, hope rose.

The artwork above was designed by my friend, Aaron Wood. He designed this poster to commemorate the tenth anniversary of 9/11 and will be donating all of the profits to the 9/11 Memorial Museum. If you are interested in purchasing this poster, it is available at his etsy shop.