I’ve been posting about food a lot lately, I know. But there has been a lot of foodie frugalness in our house. Yesterday, Jeff and I did some food prep for the week. 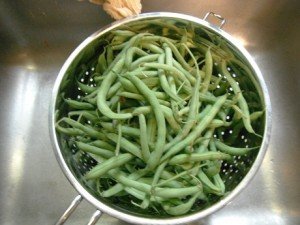 A friend of mine has a huge garden and had extra green beans. I came home with two large bags of beans late last week. The night I brought them home, I cleaned one bag but I had a meeting to get to so I blanched and bagged about half the beans. We finished the rest of them yesterday. I now have ten bags of frozen bean beans in my freezer. I love having fresh frozen veggies in the fridge. No canned or prepackaged green beans for us for a while.
My friend also gave me a head of cabbage. My husband isn’t a big fan of cabbage so I had to figure out what to do with it. I looked at my meal plan for 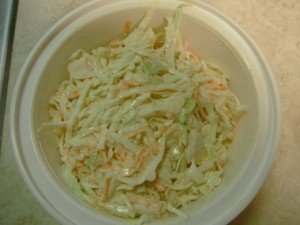 the week and decided that coleslaw might be a good solution. I’ve never made coleslaw before but I had everything I needed so I decided to give it a shot. I only used half the head of cabbage and had a huge bowl of coleslaw when I was done. I now have two big containers of coleslaw. I was pretty impressed with my first go at it. Now I can serve it with some of our dinners this week.

I also mixed up a batch of dough for the week. I’ll use this to make pizza and bread.  I made a small loaf Sunday night and it was awesome. There is nothing like homemade bread. It went very well with the chicken parmigiana  I made. Even on a budget, we eat pretty well.

It took me about 2 hours to do all this prep, but it will save me a ton of time during the week. Plus, I was able to take green beans that would have gone bad if we just tried to eat it all and preserved them so I’ll have beans for most of the winter.