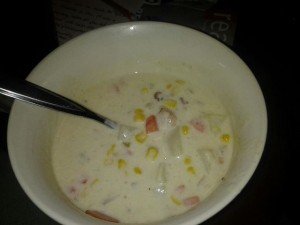 It’s cold, it’s snowy and I didn’t have anything defrosted for dinner. I wanted something warm and comforting for dinner.

This is when my brain starts going to work. Wouldn’t it be nice if I could make some chowder. I’ve never made chowder but how hard could it be? I knew that I could figure it out. So, down to the kitchen I went.

I start to take stock of what I have. I’ve got some half-and-half in the fridge from the chicken, mushroom and roasted red pepper alfredo I made earlier in the week. I’ve got potatoes, carrots and celery. I don’t have any onions but I do have shallots. I also have some bacon in the freezer and we all know everything is better with bacon.

I grabbed a big stock pot and turn the stove to medium high. I started by chopping six slices of bacon. The bacon went into pot on medium high for 5-7 minutes until the bacon is crisp. Using a slotted spoon, I removed the bacon, leaving the drippings behind.

While the bacon was cooking, I chopped a shallot, two carrots and two pieces of celery. When I chopped the carrots, I quartered them the long way and then chopped them. I sliced the celery lengthwise and chopped it. I also chopped three potatoes in small 1/2 cubes. Once the bacon was out of the pot, I turned the heat to medium and added all of the veggies to the pot. The veggies cooked for about four minutes to get that nice bacon flavor cooked in. To thicken the soup, I added 1/3 of a cup of flour. You have to stir everything around and cook it for a few minutes to get rid of the raw flour flavor. At this point, I added salt, pepper and a teaspoon of dried thyme.

Now I have to start thinking about soup base. All milk would be way too heavy. So, I decided that the base should be mostly chicken broth. I added a large can (49.5 oz) of chicken broth and turned the heat to high. Once the soup came to a boil, I turned it down and let it simmer for 8-10 minutes until the potatoes are cooked. At this point, I added a few dashes of hot sauce. I know it’s not traditional chowder but just a bit really brought the flavor up a notch. Don’t add too much, just a bit so there is a tiny bit of heat.

I went to the freezer and realized that I didn’t have as much corn as I thought I did. I would have liked to add about two cups of corn but I only had about a cup. Oh well! When you are cooking from the pantry and fridge, sometimes things don’t work out exactly as you planned. So in went the corn as my soup continued to simmer.

After a few minutes, I turned the heat to low and started looking for something to turn my soup into chowder. I pulled a cup of half-and-half out of the fridge and added it to the pot. It was starting to look like chowder, but it wasn’t quite there. Back to the fridge! I found some sour cream. I add 1 and 1/2 cups of sour cream. The flavor is good but it is not thick enough. I take some of the liquid from the pot and add a heaping teaspoon of cornstarch. I mixed my slurry and add it to the pot.

I have two thickeners in my kitchen: flour and cornstarch. Flour is for making rues before adding liquid. Cornstarch with liquid added is for thickening liquids after they have been added to a dish.

After a few minutes, my chowder is thickening up. Jeff decides that it needs some cheese. I added about 1/2 a cup of shredded cheese. It was a good addition and it finished up the package of cheese. Lastly, I added the crumbled bacon back to the pot and stirred everything together.

I was a bit worried as we were putting this together but I have to say this is the best corn chowder I have ever had. It was amazing. For me, the best part of cooking is having no plan at all and coming up with an amazing meal to put on the table. I find the more I cook, the more I learn what favors work. Experiment. Try new things. Try this chowder.

Cook bacon in a stock pot over medium-high heat until crisp. Remove with a slotted spoon leaving behind the drippings. Add onion, carrots, celery and potatoes to drippings. Turn down the heat to medium and add 1/3 cup of flour. Stir to incorporate the flour and cook for 2 or 3 minutes. Add salt, pepper, thyme and chicken broth. Turn heat to high and boil until potatoes are soft but not mushy, about 8 minutes.

Turn heat to medium-low. Add a few dashes of hot sauce and the half-and-half. Stir to incorporate then add sour cream. Keep stirring until the sour cream is fully incorporated. Remove some of the liquid to a small up and combine with the cornstarch to create a slurry. Add the slurry to the soup and heat until thickened. Add the cheese and bacon. Stir and taste. Add salt and pepper if needed.