February was a very exciting month. About two weeks ago, we paid off the car. Things have been so busy around here that I just got around to updating the debt snowball.

I decided to leave the car on there, crossed off for motivation. I updated all the balances, loan amortization schedules (yes, I am the nerd in our house) and payoff dates. Here is the original debt snowball:

There was actually an error in the previous snowball. The payoff for the car and Nelnet should read 2014, not 2013. We are actually ahead of schedule! I decided to update all the balances to show we are making a little progress on the other debts. Not much but at least some.

These calculations are based on current income and expenses. No raises or outside income were included, which is part of the reason we paid off the car faster than we thought we could. My hope is to pay everything off by June 2016. Why June? Because that is my husband’s birthday month.

I also did some dreaming last night. I started to wonder how fast we could pay off the house. We purchased the house in December 2004. Last night, I figured out we could pay off the house in 2020 even if we finished the snowball on the scheduled date, saved our emergency fund AND started putting 15% away for retirement. When I shared this with my husband, he was a bit shocked. I had to show him the numbers. We have a 30-year mortgage so paying it off in 14 years early while paying off this mountain of debt would be pretty amazing. 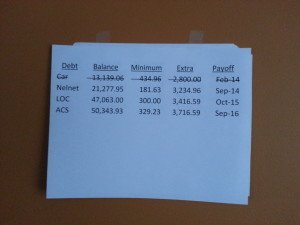 And just to prove we actually have the debt snowball on the wall, I thought I would include a picture. The old snowball is underneath. Everyday, I look at it and imagine what it would be like to be debt free.

Have you ever dreamed what it would like to be debt free? It is a beautiful dream; one that in six years, we will achieve.