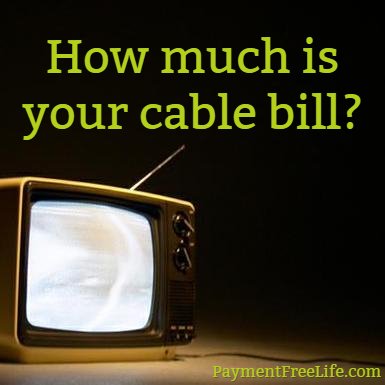 Sometimes, I really feel like I am out of touch with the rest of the world. Living in my frugal corner of the world, I am sometimes shocked by how much people are willing to pay for things. Cable bills appear to be one of those things for which I am COMPLETELY out of touch!

Before Christmas, I was talking to a small group of people about internet speeds. I said we have 105 mps because of the businesses that we run out of the house. Someone asked how much I pay for that. It costs $76.50 per month. Apparently, people were impressed with that. I got a lot of “Wow! That’s pretty good” reactions from people in the group. So I asked what other people were spending. The answers varied from $240 to $310 per month! Seriously???

My jaw clearly hit the floor because a number of them reassured me that the amount they were spending was for TV, internet, and phone service. My gaping mouth was left unchanged by those reassurances, so I was asked how much I pay for all these services.

Well, $76.50 covers the internet and we get free basic cable (probably because we cancelled our cable TV for over a year). We have Ooma

Oh, and we have Amazon Prime

to stream TV shows and movies. They all had Prime as well, in addition to their $240 to $310 per month cable bill.

I thought, this can’t be normal. This is just a few people. As we moved to a larger group of about a dozen people and the discussion continued, apparently this is very normal. Everyone in the group, except for me had TV, internet, and phone bills that were well over $200 per month.

I got upset when my bill went to $92 per month! I cancelled the cable TV portion and got an antenna to watch football and PBS. Previously, we had Netflix or Hulu in addition to Prime, but I didn’t want to spend the additional $8 per month. Plus I have more things in my Amazon queue than I will be able to watch in a lifetime, so I’m good with one service. I’m not sure how I would react if I got a $240 cable bill. Actually, I’m pretty damn sure I know how I would react.

Maybe I’m just completely out of touch but $240 per month is a lot of money. That’s over half my grocery budget. Over the course of a year, that’s a pretty decent vacation. An extra $160 placed in a retirement account at 8% for 30 years would be $234,904.14. Yup. That is a lot of money to give up to watch Swamp Stars or  The Real Housewives of King’s Landing.

Help me out here guys! How much are you spending each month for these services? Do you still have cable TV or have you cut the cord? I promise you that as soon as Comcast tries to charge me for cable, we will cut that cord again! Am I just completely out of touch?