Do you feel like you have too much stuff? If you do, you aren’t alone. In a recent study, 50% of people polled said they could live happily without most of the stuff they own. Two-thirds stated they get rid of stuff they no longer need at least once a year.

Why do we accumulate all this stuff just to get rid of some of it every year?

I’m tired of accumulating stuff. We spent years accumulating stuff and trying to find somewhere to put it. We’ve got books, electronics, and the ever dreaded nick-nacks. All this stuff uses resources: electricity, space, time to organize and clean. It accumulates dust and it clutters up our space.

One of the reasons I hated cleaning my house was because there was so much I had to do before I could actually clean my house. I had to pick up all the things that didn’t belong in the room, organize everything, move things, dust around and under things. It took forever.

Over the past year, we’ve gotten rid of a lot of stuff. We’ve simplified things and I’m looking to do even more. My summer project is to simplify our lives. That means going through things, selling stuff, donating and giving stuff away. Over the next few weeks, I’ll be chronicling our journey. Hopefully, the summer will end in a tag sale to generate some extra cash. Either way, we’ll end up donating a lot of stuff.

So far, I’ve cleaned out the dreaded linen closet. It was a complete disaster. We couldn’t find anything in there. I’m really happy with the result! 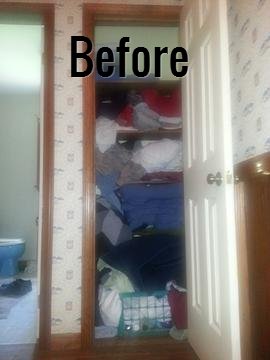 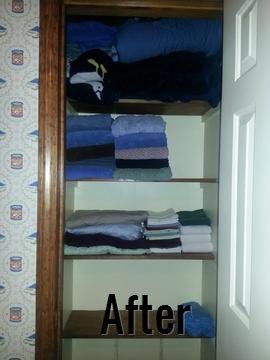 I pulled out about two garbage bags worth of stuff to donate to charity. There were some curtains that I was given that I will never use. There were lots of flat sheets, which we don’t use.

I swear karma is pushing me in this direction. In today’s mail, I got a postcard from the Boys and Girls Club stating that they are doing a pick up in my neighborhood on June 30. That gives me just short of two weeks to get as much done as I can. Not having to drive all the stuff to the donation center is a huge motivation.

Do you have too much stuff? How often do you purge stuff? Do you donate or sell things you get rid of?