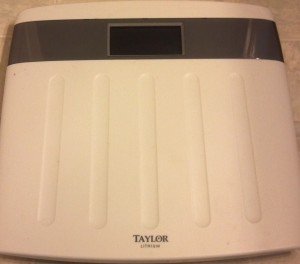 A few months ago, I went for my annual physical and got some less than stellar news. My A1C (the predictor for diabetes) was high. Not insane crazy high, but high enough that I needed to do something about it. At first, I kinda freaked out. After all, I love my bread and pasta and making time to exercise everyday? Umm… sure; I’ll get right on that! After getting over the initial annoyance with myself, I got to work on changing the way Jeff and I eat and how we live our lives.

As many of you know, my schedule is pretty hectic, hence the long periods that I sometimes go through with no posts. The thought of trying to work in exercise sessions and other life changing things made me cringe. I was pretty good about going to the gym when I was younger but as I got older (and more frugal) the gym was less appealing. I tried going for walks but I was constantly thinking about all the things I needed to be doing other than walking.

The first thing I did was to get more active around my house. Just keeping busy doing little projects and even the everyday stuff that I wasn’t doing everyday made a big difference in my activity levels. I also started waking up at the same time everyday, even if I had nowhere to be. Now, I wake up at 7:00 – 7:30 every morning and get my day started immediately. I know it’s not super early and many of you are already at work by then, but for me, it’s a big deal. I try to stay active most of the day. I am spending less time on the computer and in front of the TV. Instead, I weed my garden, pick up the house or truck laundry up and down two flights of stairs. Jeff and I have also done a ton of projects around the house. The more I move, the more energy I have to keep moving.

The second thing I did was to make sure I eat something for breakfast every morning. I never really bought that “most important meal of the day” business until recently. Having something small for breakfast every morning gets my metabolism going and my body burning some of that stored energy I’ve been saving up. My breakfast usually consists of a Carnation Instant Breakfast with 1% milk. I bought a 30 pack at Costco for $10 so it’s a pretty inexpensive breakfast even with the cost of milk factored in.

Next, I took a look at what we were eating. I started menu planning again. I cut down on how much pasta we were eating. We switched to whole wheat (for me) and white whole wheat (for Jeff). I bought some white whole wheat flour to mix with regular white flour at home. I started watching our portions. I make sure that we have veggies in the house to snack on, like carrot and celery sticks and cucumber slices. I stopped buying potato chips and switched to pretzels instead. I did find some great chip-like things at Costco called PopChips. They look like chips but are popped like rice cakes. They are really low in fat and taste yummy.

One thing that really helped me get an initial handle on how much I should be eating is a site called MyFitnessPal. It’s a site (and phone app) that allows you to track your calories and activity. I used it for about a week or two to get a handle on what portions should look like and how much I should be eating. It’s also good for looking up info on food at restaurants when you are dining out. By the way, it’s free!

I know it doesn’t sound like a lot of change, but in two months, I’ve lost eight pounds and two pants sizes. I have a lot more energy, my house is cleaner and more organized and we really aren’t spending much more on food. The extra money I’m spending on fresh ingredients is offset by the fact that I am making smaller meals. Plus, this is something I can live with. I don’t feel like I’m on a diet. I’ve seen so many people diet just to gain the weight back. I feel this is something we can do for the long haul.