I don’t know what got into us this weekend but we did a lot of work around the house. Usually we are pretty tired from our busy week so we don’t get as much done around the house as we would like to.

On Friday, we scrubbed down two of our three bathrooms and organized the cabinets and shelves in them. We also attempted to fix the leaking shower in the master bedroom. Every time we used the shower, the floor would get wet. We tried to recaulk around the shower door twice so we came to the conclusion that the door itself was leaking. I hate shower doors so we went to YouTube to see how hard it would be to remove it. Not hard at all! So down came the shower doors. There were a few rusted screws that gave us some trouble but we got those out also. We also discovered that there must have been another door there before because there were some old screws still in place but the heads were gone. We are going to have to find a solution to get those out but overall, I am happy with the job. Next weekend, we will fill the holes and be able to use our shower again!

Yesterday, we ran a bunch of errands in the morning. We picked up a new shower curtain rod and curtain. We also decided that our toilet seats needed to be replaced. They were wooden and not very arse-friendly (especially in the winter when it is cold!), so we replaced them with soft ones. I am very much liking that change and so is the husband! 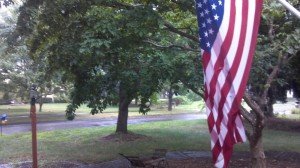 We got home from our errands just before it started raining mad. Good timing!

A few months ago, we got rid of cable and I’ve been doing fine with Netflix, but really missed network tv at times. I was also bummed that I couldn’t get access to the Olympics online unless I had cable (Boo NBC!). Football season is approaching and the thought of not being able to watch the games made me sad. I recently read an article on Get Rich Slowly about alternatives to cable. I decided to get an antenna to see if we could get local programming. The antenna was $25 and we needed a converter box since we have an older TV that doesn’t have an HD chip in it (It can display HD though). For $75, I have 25 channels of local programming in HD! No monthly fees and it was even coming in when it rained, which satellite did not when we tried that alternative a few years ago. Yay, TV. 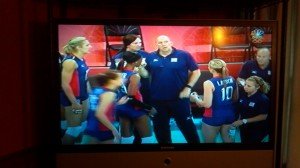 But wait, that’s not all! I had purchased some peaches at Costco about a week and a half ago which were starting to go bad. Jeff has been wanting me to make him raspberry jam but the cost of raspberries is pretty high so I found a recipe for peach raspberry jam. While we were out, I got some raspberries and canned eight jars of jam on Saturday afternoon. 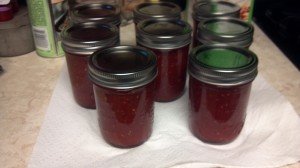 Aren’t they pretty? I’m going to make another batch in a few weeks since that is not going to last long in our house. Plus, they will make nice gifts at the holidays.

I figured after all the repairs, demolition in the bathroom, shopping for supplies, cleaning and cooking we had done this weekend, I would be ready to sit on my behind and take a break today. Nope! I think all the work we’ve done around the house the past few months has really made me want to get rid of all our extra crap and get everything organized. We did the garage a few weeks ago and now we have a place for all of our tools, plus it’s super clean. We got the spare bedroom all set up last weekend and have been steadily decluttering around the house. So with that inspiration, I tackled the kitchen!

I  forgot to take before pictures but here are some after shots. 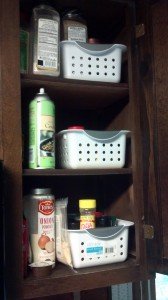 This is my spice cabinet. I love the bins in here. On the top shelf are spices that I have in my spice rack. These are things I do not need to access unless I need to refill something. The bottom shelf is stuff I use a lot: garlic powder, chili powder, nutmeg, Mrs. Dash, etc. The middle shelf is stuff I use less often like allspice, whole cinnamon sticks and ginger. Everything is organized now and my buckets are not over flowing. I found a few things I had duplicates of, which I condensed into one container. I’m really thrilled out how this cabinet came out.

The bane of my existence is my huge pantry cabinet. This thing gets so disorganized it drives me crazy. I think it looks pretty good today! 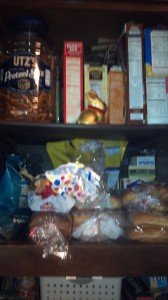 This is the top half of the cabinet… 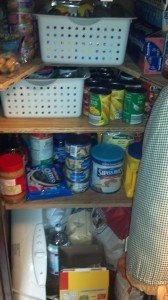 and this is the bottom half. This cabinet is huge and cavernous. It’s very easy to lose things in here. I use the bins for items I use a lot like canned soup and canned tomatoes. I can just slide out the bin and grab what I need. I also use a bin to organize all of my plastic bags. This makes life so much easier. The bottom shelf is used for things that I do not access a lot, like my huge bag of flour, my rice cooker and my huge bag of rice. In front, I keep things I do access a lot like my Foodsaver and my Costco-sized box of Carnation instant breakfast (I mix one up every morning).

With all that organization and everything in its proper place, my counters are now also clean and clear of clutter. 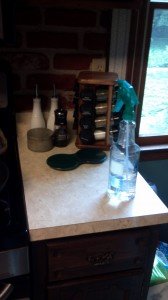 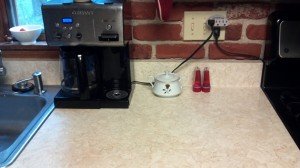 Amazing isn’t it? Well, it’s pretty damn amazing for me since my kitchen is usually all sorts of cluttered.

Now, I’m pretty much pooped out for the rest of the day. I’ll come up with something for dinner, maybe homemade pasta since I didn’t do that earlier in the week. For now, I will enjoy my super clean bathrooms and kitchen counters and my subscription free TV!