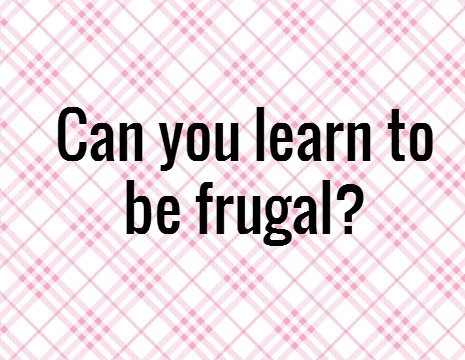 This morning I was reading Frugal Girl, which is a great blog. Her post started to make me wonder if frugality can be learned later in life or if it’s just genetically existing in some people. I was thinking about this as I drove to my mother’s house this morning. She wanted to go look at digital cameras and go to a local meat place.

Grocery shopping of any sort is always a good reminder for me that I learned a lot of my frugality later in life. I remember my mom sometimes using coupons when I was a kid. I do notice that when we go shopping now, she doesn’t look at prices. She was picking up a package of bacon to put into the cart and I asked her how much it was. She said she didn’t know. I ran across the store and got her a package of bacon that was on sale. I’m freakish about price checking. I check the unit price of everything I buy. I know the lowest price for more items I buy regularly, in my head. She is good at finding deals on clothing and other items, but she is a shopper. She regularly goes into stores to hunt for deals. I hate shopping and therefore save up my coupons and look for deals in the paper. I don’t want to go into the stores. Plus, if I don’t go into the store looking for deals, I can’t spend money I don’t want to spend.

I really hope that frugality is a learned behavior. Being an accountant, people tell you about their financial position, even when they aren’t your client sometimes. People need to vent about what stresses them out and money stresses a lot of people out right now. I listen. Sometimes when listening, you just want to shake them and say “Wake up! Stop Spending! Cut up those cards!” You hope someday, there is some way to help them see the light.

Frugality is a learned behavior. Sometimes you learn it from family or friends. Sometimes a book catches your eye and you realized you need to make a change. Sometimes necessity bites you on the butt and frugality is the band-aid.

Are you frugal minded? How did you stumble upon it or were you always this way? Have you ever helped a friend or family member become more frugal?